Abi Almond and Judith Wardle review a day where talks ranged from waistlines to property, and trauma to targeted design

It was billed as the last Trends Day of the decade and had Vince Cable as the star attraction. This was enough to entice a large audience of qualitative researchers into the caverns of Vinopolis for a day of "work-free" inspiration and learning. And, overall, it didn't disappoint. It was like a good Sunday paper on a relaxing Sunday afternoon, full of interesting articles and a break from work. The nitty gritty reality of debriefs, proposals and fieldwork receded and there was the joy of spending time with other qual researchers.

Pets, property and the NHS

Vince spoke for 45 minutes without notes. He started by telling us that what distinguishes us as a nation compared to other nations is that we are obsessed with property, pets and the NHS, but that things are changing and need to change, given the current economic crisis.

He outlined a number of areas where our attitudes and thinking need to be questioned in future: property ownership with a move towards more rental and less ownership; how we regard the state and how the gap between our Scandinavian-style spending can be reconciled with our US-style taxation levels.

He also touched on our attitude towards liberalised markets, and the City in particular, and how far our disillusion with these institutions goes. He went on to discuss fairness, both in terms of social class and across the generations. He reminded the audience, made up mainly of the tail end of the baby boomer generation as it happened, how lucky we have been compared to the generations leaving school and university now. They are facing a life journey with no secure job, no guarantee of a pension in their old age and difficulties in buying a house of their own.

Harriet Lamb's talk on the Fairtrade organisation was uplifting. It showed that even in these tough times 7 out of 10 consumers think it important that workers have good pay and conditions, even if it means that products ended up costing more. Not only consumers, but large companies are also realising that "sustainability is becoming an imperative" and more and more are signing up to Fairtrade and even seeing an increase in sales as a result (Sainsbury's has witnessed a 10% increase in banana sales since going Fairtrade).

Currently, most companies are willing to take on the extra costs associated with Fairtrade themselves, but Harriet indicated that a wider discussion needs to be had whereby consumers become less accustomed to "cheap" food.

There was an interesting discussion generated from the floor about why Fairtrade is thriving in the current climate, whereas organic food is being de-listed. Harriet thought that it was because Fairtrade has successfully managed to "personalise" its cause, talking about farmers and their lives, whereas organic is more about a "process". Also, the organic movement has far less grassroots support, something that the Fairtrade movement has harnessed to great effect.

Victoria Lambert's talk on Health Trends was full of facts and figures and was the talk of the coffee break with delegates trying to estimate their girth. Apparently anything over a 31.5 inch waist for a woman leads to an increased risk of diabetes — which had everyone drawing in their stomachs! We learnt that we are eating the same number of calories as we did in the 1950s, but the kinds of foods we are eating have changed (more snack foods, more sugar, more protein, more fat, and lots of the very bad, very high in fructose, corn syrup) as our levels of activity have decreased.

All of this has led to an obesity crisis, where our expanding waist lines have increased the risk of diabetes in particular. For those of you who know me — Judith, that is — you'd probably describe me as "small". Indeed, I have been called "titch" in the past, but I was delighted to learn that had I been born only 30 or so years earlier I would be exactly average. Probably puts the speed that we have expanded into some sort of perspective!

The afternoon had two very different topics for our consideration. One was about designing products for the ageing generation and the other was about trauma. There was little link between the two, but both were fascinating.

Ron Nabarro of Senior Touch told us to "beware of the last years of your life" as we still live in a society that seems not to value their older and wiser members and where products consistently fail to take account of their older customer profile. Yet in most cases, he said, products that are designed for the elderly are usually just as appreciated by younger people — good design is good design and shouldn't be age related. Mobile phone designers please take note.

It wasn't all relaxing in a comfortable armchair, however. It was a Trends Day after all, and we had to show we had learnt something. The "teachery" bit was rather sprung on us and had our table cowering in the back row, hoping not to catch the teacher's eye.

The rather vague instructions to "discuss" the papers and then report back on what we had discussed was an ideal opportunity for the more confident clever clogs among us to share their impressions with the rest. A bit more direction, please AQR, next time!

Caroline Garland started her talk by telling us what a trauma was not: it wasn't the loss of a parent, sad though that may be, because it follows a normal course of events. Nor was it being unable to decide which pair of shoes to wear with an outfit.

It was, in fact, where damage to the apparatus of someone's mind had occurred and where the incident in question was still an open wound. In fact, the word "trauma" means a wound or a piercing. Her definition of recovery was when the event was no longer the most central fact in a person's mind. 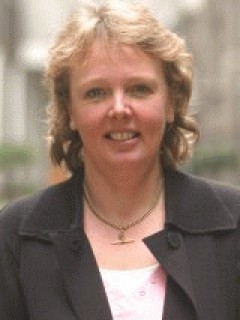