You say creativity, I say innovation

In Depth talks to Gord Ray, a client who has worked in very creative industries, but considers that it is people's attitude to work – and not their title – which results in innovation.

In an attempt to get a client’s eye view on the issue of creativity in business, earlier in the summer we interviewed Gord Ray, the publishing director of Wallpaper, a Time Inc-owned world leading design magazine.

Gord’s career was not always destined to be linked with ‘creativity’. At school he liked the concept of brands, excelling in marketing courses, yet though he signed up to drama in high school he didn’t want to touch any lessons relating to art. But what he did discover as an undergraduate in Canada was a love — even a passion — for good ideas. And this, in turn, gave him a focus. In the first term of a four-year business course he knew that what he wanted when he got out was a career in advertising.

“I started to get Marketing Week and Ad Age from the university library,” he says. “I would see people working on big brands, creating 30-second TV commercials and for some reason thought that was the most exciting thing.” He was lucky in that his university was one of three in Canada that ad agencies recruited from and, having picked up the industry language and a fair bit of background knowledge, talked himself into a job.

At the time he reckoned it was one of the best jobs around. He was young, bright eyed and bushy tailed and excited to be part of an ad agency — even if he was working on toilet paper and Pepto-Bismol. But in reality, despite being in a creative industry, it proved neither very exciting, nor productive, resulting in possibly two ads a year. He discovered that it is far harder to live creativity than to talk about it. Time for a different outlet, maybe, so he took a night course to be a film director, and then another as a photographer, before deciding that neither were right for him.

For creativity in business can sometimes be a misnomer. It is not necessarily the nature of the industry itself that fosters creativity but the people who work within it. So how would he define creativity in the commercial world? “It is,” he says, “the ability to transcend traditional rules, patterns and relationship to create meaningful new ideas, forms, methods and interpretations. In a corporate sense, there may even be a case for interchanging the use of the word creativity with innovation.”

This, he claims, makes it a lot more tangible. “It’s a real thing, or it’s a new way of thinking, and it relates to an end object, whereas creativity is so nebulous that it could just be a totally different way of having a meeting, or changing how you put your desk in your office,” he says. In fact, at his first job in advertising it is the memos from the finance director that he recalls as being fun, interesting and...creative, just because they were different.

Creativity is in essence, he adds, a qualitative judgment. Egos are involved; it’s hard to prove expertise as everyone thinks they know what creativity is — when they don’t. And, above all, it’s subjective. In industries such as advertising, and publishing for that matter, it reinforces the need for creative directors who are confident leaders if they wish to establish an environment in which new ideas and ways of thinking can grow.

Gord’s career has taken in stints at high profile ad agencies in Toronto, Prague, London, punctuated by an MBA at IMD in 2002, and then five years at luxury goods firm Georg Jensen, based in Copenhagen. He became its global marketing director, before joining Wallpaper* in 2007. Over this time he has pondered the definition of creativity, and why it’s important to business.

He contends that if it’s present it will encourage fresh thinking and lead to competitive advantage. But, and it can be a big but, in today’s marketplace it can also thrive in a high-risk culture and lead those who embrace it to ‘fail often to succeed sooner’. At Wallpaper*, he experienced culture shock when he first joined, adapting to the publishing world of a big company with a dynamic, creative staff, where as publishing director he often had to have a foot in two camps: finance and creativity.

The judgement calls that he had to make were, more often than not, financial rather than creative but they were often intertwined and still involved an element of risk. A creative director could well be saying: “we can’t not do this, we stand for ideas and innovation, we have to be pushing the envelope,” whereas Gord would be asking: “well, what could be the worst that happens if we do, would we lose advertisers, would it be withdrawn from sale, or might it make people talk about it more?” It is a fine balancing act, whether to promote creativity or play safe. Indeed, sometimes it boils down to juggling figures so as to spend more on one area while saving money on another.

Away from publishing, his experience is that creativity is viewed in different industries in different ways, both from the point of view of product/service and the culture. His personal view is that most successful companies have a creative culture, but that it is not always immediately obvious. And just maybe, the whole point about creativity in business is that it is not just an element in isolation but a complex mix. Gord is quick to point out that only a minute percentage of the population has the potential to be creative geniuses, but what he looks out for are those who are insatiably curious, particularly about creativity and idea generation.

Judging creativity will never be easy, he says, but he does advise that, for those who want to promote it in business, it is:

We caught Gord on his final day as publishing director. A friend had got him involved with a small charity and he was setting off, after a short break, to a schools building project in Lusaka. We look forward to learning what skills he brings back. 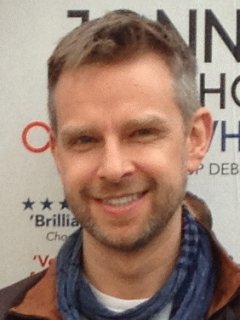 Canadian-born Gord's career has spanned work with such well-known advertising agency names as Leo Burnett, and Saatchi & Saatchi – in Europe and his homeland – before he joined luxury goods firm George Jensen in 2003 as global marketing director. His most recent post was as publishing director of Time Inc.-owned Wallpaper* Magazine. He is currently taking time out to volunteer in Zambia.