As a frequent commentator on selfhood in fashion and advertising images I join my audiences in agreeing that industry guidelines which prioritise selfhood as an ethical portrayal of humanity could tackle image-portrayal stereotypes. Why not? The objectification of women, or aspects of difference (such as portrayal of people of colour or disability among other things), has attracted decades of criticism from marginalised communities, feminist scholars and commentators like Jean Kilbourne. In a world that now generates prolific amounts of still or moving imagery, the accountability debate within mass-media has to move centre stage.

There are plenty of us who feel that objectification — the presentation and perception of a human being as an object or thing — should be ruled outright immoral. And yet it’s ubiquitous in my industry, so in pursuit of a shorthand vocabulary, I propose naming and aiming for ‘selfhood’ as the opposite of objectification, in order to drive cultural attendance to new values.

The ‘authentic active doing and being’ of a person is vital for reframing gender learning and perception. Why? Because when we don’t see selfhood in images, we are left with body parts or a body without agency. And let’s be sure about one thing: women and girls, as the frequent focus for objectification practice, pay a high price for this particular inequality.

To flesh this out (yes, pun intended) if you are a man in 2018, you will be unaware of your privilege to know yourself as a human being complete with selfhood. There are men a plenty in our media ‘being human’ all the time. By contrast, the objectified woman adorns the urban landscape and is almost unnoticeable in her ubiquity.

Carved-up, shrink-wrapped, passive and perfected, undressed and unloved she is used to instigate arousal for related or unrelated product with a frequency that women repeatedly object to and are ignored. Advertising pundits legitimise the consumption of the young female body within marketing, as a ‘neutral’, neurological process because sex (or the suggestion of sex) sells. Yet studies contest this neutrality.

And if you are a woman in 2018, having normalised the expectation that your body and/or appearance will be consumed and evaluated for its sexual service to the viewer, to be judged over and above competence-based attributes, intellectual and experiential capital or any other qualities for that matter, as well as internalising the psychological disempowerment that automatically goes with this knowledge, you find it harder, much harder, to experience your worth. And so do random men, along with your male bosses and colleagues, who have also been socialised to consume femininity this way.

Paygap is one example of gender objectification in action. Jo Swinson, the former Government Minister of Equalities, reviewed findings from 172 related studies in 2015 to announce that objectification culture resulted in the reduction of economic, political and social power of women.

Yet top level criticism continues to make little impact within advertising or fashion administrations, making challenge to the perpetuation of this culture crucial. It’s why, after a lifetime of working in fashion, encouraging bosses to portray women more broadly in their campaigns, and later co-founding the award-winning campaign All Walks Beyond the Catwalk in 2009, I chose to look at the motivations of imagecreators during my recent MSc study in Applied Psychology.

My initial proposal to understand how fashion photographers rated the importance of selfhood in their work led to aims, as a result of the collated findings, that I could take forward within my own process, namely: to instil pro-social and ethical ambitions in the next generation of art directors, photographers, stylists and designers through a grounding in psychological knowledge; and to further disrupt the fixed mindsets of current industry thinkers with my new psychological tools.

That my study found uncertainty at how to define objectification and express selfhood does not surprise me, and so it makes sense to further investigate this ‘how to’, aspect for ethical portrayal of others. It is why I’m now transforming my research into book form, so bear with me. I didn’t say guidelines, new values and community adherence would be a simple matter, did I?

But desire for change and hyper-vigilance for objectification phenomenon is how we all begin. Let’s start with your priority of safeguarding your agency’s credibility while the gender panorama expands to take in wider conversations about representation or safety in the workplace.

You already know that to remain relevant all brands need to keep pace with the cultural narratives of #metoo and #timesup because many female end-users of your product are demanding better understanding of their needs and mobilising through socialnetworking. My suggestions below are requested whenever I talk about this subject and are presented here as a small window into my own research and thinking.

1: Desire to remove female objectification as an aesthetic from any future visual materials for clients must be proposed within the working culture. It should be disseminated as an ethical imperative by enlightened leaders and worked through as a self-regulatory process to be assessed for effective outcomes and evaluated on a wide scale of attributes beyond the quarterly profit return.

2: Selfhood can, for the sake of simplicity, when disseminated as the authenticity of active doing and being, be used as a simple litmus test. In an image that features female product, worn by a female and directed at a female audience, ‘male gaze’ — the priority opinion on women’s bodies/femininity/behaviours in massmedia culture — creates dissonance and potentially damages brand communication. Would any woman lie back and open her legs in a dark cold alleyway while wearing an expensive Parisian design on her upper body but nothing on her lower half? Using the selfhood measure, the creative team at Yves Saint Laurent could have acted with more clarity in pursuit of audience engagement and use of funds. This campaign, released in France in the spring of 2017, was banned within days, amid angry outbursts.

3: Diverse perspectives within teams will allow for a broader view and vital discernment at the collaborative developmental stage. Studies show that diverse ethnicities, identities, cultural and faith opinions enhance creativity and productivity. Would ‘girl-gaze’ have interpreted the brief for the above campaign differently? Most likely. This makes unconscious bias, underpinned by dominant culture and its sense of entitlement to view femininity devoid of selfhood, a target for deconstruction and dismantlement. Using psychology, meanwhile, to understand cognitive process (and its dependence upon learning templates shaped by what has gone before) therefore becomes another priority, because all of us are reared and educated by dominant culture norms.

These three initial suggestions need workplace context and application as well as follow up and review. For a better future, the impetus to pilot a change must come from leaders now. But broadening all research questions to investigate selfhood as a tangible and ethical underpinning of identity discussions is a credible entry point, too.

Incentives are many in this age of connectivity, global inclusivity, and empowerment. Fresh narratives around identity politics are engendering authentic definitions of human experience and depictions of more breadth and depth are at last making these themes compelling triggers for the emotional arousal of audiences. In plain speaking — facilitating opportunities for exhilarating, and emboldening messages to a diverse and discerning audience, means that the pursuit of selfhood is simply sensible business practice. 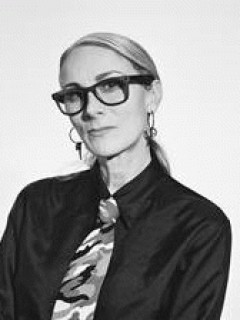 Caryn Franklin MBE is visiting Professor at Kingston School of Art and author of SEXY: The psychology and the sickness of the objectified woman. She is a former Fashion Editor and Co-editor of i-D Magazine; a prime-time TV Presenter and Broadcaster, now Fashion Commentator and Activist.