People like Ken don't come along that often, but when they do their positive influence on everything they undertake, and those they work with, is clear for all to see. Ken was a great friend, boss, mentor and colleague to countless people in the industry and his legacy will continue to help shape this sector for many years to come.

Ken didn’t sit still for any of the 40 or so years that he worked in research. He started at NOP and then moved to RSL (now IPSOS Mori) where he worked for many years, becoming joint MD. Then, alongside his wife Trish they established Discovery Research, their own agency in 1995. Ken went on to help support the set-up of Criteria Fieldwork, develop the Spectrum viewing studio brand, and be intrinsically involved in the development of The Thinking Shed online qualitative platform.

Ken was a strategy man, a big thinker. His ability to take clients through complex findings and thoughts in a succinct and impactful way won him many plaudits and admirers. He was storytelling findings years before it was even a thing!

Within Discovery’s first year Ken presented ‘The West Ham Syndrome’ at the annual Market Research Society conference. The paper looked at what commercial brands could learn from the loyalty that football fans show to their club. Many clients have said that it was this paper with its fresh views on brand loyalty which remains their outstanding memory of Ken and illustrates his way of thinking differently.

Ken’s approach was to try to improve all aspects of research, and everything that he and Trish were involved with had the same values of bravery, innovation and caring for staff and clients alike. In order to help this along (and ever the centre of attention), Ken was the instigator of many a karaoke session, three peaks challenges, cocktail-making competitions and supplied an everlasting supply of ‘Ken’s spicy prawns’ on the BBQ. Oh, and of course he extended an open invite to all who wanted to go skiing with him.

Ken’s influence ultimately helped shaped the research industry. He won a range of awards along the way and gave a whole range of different generations of researchers purpose. At Discovery, we described him as the Kevin Bacon of research (bear with me here...this is the game based on the ‘six degrees of separation’ concept, with players seeking the shortest path between an arbitrary actor and film star Kevin Bacon). Well, Ken had that same influence on the research industry: we are all only a couple of steps away from being connected to his achievements somehow. His recent role in promoting the MRS Grad Roadshows only further embedded this with a new generation of researchers enthused by his passions.

It is particularly noteworthy that Ken brought all of his experience and personality to the table when he was voted in as AQR Chairman from 2012 to 2015. In his three years in the post he displayed a particular skill of being infectiously enthusiastic and gleeful while simultaneously firm and direct. He helped the AQR Board work together with purpose, was clear with his intention to get things done, while prompting much laughter along the way. Everyone involved remembers him as a great Chairman, a man with passion, opinions and always filled with joy. He was the energy in any room he was in.

Thank you for making us smile. 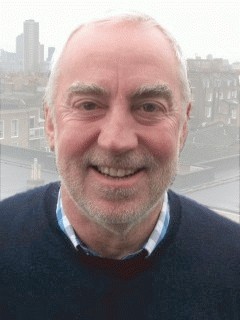