Has lockdown stifled or encouraged creativity? Janet Weight- Reed, a working artist for nearly 50 years, says the answer lies in the attitude we bring to each day, lockdown or not.

Two elements, routine and structure, are so ingrained in my psyche that they eased the transition from 'normal life' to lockdown. While others might normally have had routines imposed upon them, trains to catch, meetings to attend, the main area where I have seen change is travel.

Rather than see this as a negative, though, I have opted to work on projects that had previously been placed on the back burner. Thankfully, having employed social media and Skype for work and personal use over the years, I am familiar with communicating with people virtually rather than in person, so no learning curve here.

A year ago, at the beginning of the first lockdown, I was aware that many people were in what I call the 'New Year's resolution' mode. Excitement reigned as they ordered all sorts of art supplies, knitting and sewing kits, plus cookbooks galore. It was as though we'd been given the green light to get stuck in, and many did.

We had beautiful weather during the first and second lockdowns. This allowed us to be creative with gardens, balconies, and windowsills. In fact, according to the Royal Horticultural Society, the amount of front garden greenery across the nation grew by an area 70 times the size of Hyde Park since 2015. People were beginning to realise that a growing garden was much more beneficial than a paved over car park.

Spirits, in general, seemed high as creativity blossomed throughout our communities. The little rainbows that began to appear in neighbourhood windows were uplifting and I am sure, fun for children to make. It also helped them to feel that they were part of the bigger picture, and consequently making a difference.

Having posted tutorials on my blog for many years, I was delighted to see thousands of others doing the same, catering to all sorts of creative endeavours. Then there were the millions jumping on board the Zoom experience, all of which seemed to be a great idea.

This gave me hope that, through the pandemic experience, lives could be changed in many positive and lasting ways.

Working from home meant that many, often more fortunate, families were able to spend more quality time together. Without long commutes people appeared to have more energy and zest. We were able to take time to hear the birds.

Yet, by midsummer I could see that people were getting restless. I didn't hear quite so many talking about their new hobby or what they had just learned through an online seminar. Instead, I heard talk about how bored they were and that all they wanted was to get back to 'normal'.

To Zoom or not to Zoom

Even those who had taken to Zoom with great gusto were beginning to say how tired they were of their screens and communicating with groups of people in little boxes. And then I began to hear people say that they had so many Zoom appointments that they didn't have time for themselves or to pursue the hobby that they had begun to enjoy. Fragmentation, the big enemy of creativity, was taking hold.

In other words, the wonderful new lessons we were starting to learn at the beginning of lockdown were being lost as we ran from one Zoom appointment to another like headless chickens.

As community spirit began to dissipate depression set in for many people of all ages, something that we will all need to address as a society. So many of the issues that have caused these problems were with us pre-pandemic. What the virus did was to bring them to the surface.

The big question is: how will people behave after this is all over? I'd like to think that those who have found new creative interests will continue with them. And I hope that the new community spirit will continue in many forms. I would also like to think that we will never take our sacred green spaces for granted again… but all this is up to each and every one of us.

Route map for the future

Nurturing a creative endeavour during this period has been shown to bring a sense of fulfilment and wellbeing, dissipating any tangential fears. Most importantly, it will be highly beneficial for our individual and collective physical and mental wellbeing in the future.

Will the pandemic affect my own creative process in the long term, along with the substance of my tutorials? If anything, it's strengthened my belief that creativity in all its many forms is key to emotional and physical wellbeing. As with everything in our lives, we observe, experience, and hopefully learn. So, I am sure there will be new insights even if, fundamentally, my beliefs stay the same.

If we've learnt anything from this period, I hope it will be a recognition that to enjoy the benefits of the creative process we will need to bring consistency, structure and routine into our daily lives along with a positive attitude. Some of these elements can be taught, but many will have to be learned by consistent practice. 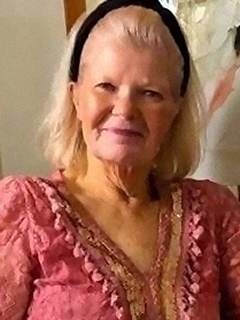 Janet has been a working artist for over forty years. She is best known for her love of colour and spontaneous style.